I first discovered Brightwork in 2015 on the day the Barons Trail was launched in Lincoln.  I had painted the Lincolnshire Waterways Baron in the traditional Roses and Castles style and he was taking a trip on a boat around the Brayford Pool before being set on his plinth by the water for the duration of the summer.

Watching this spectacle on a very wet and windy day was a gentleman called Sam Yates who was on a day trip to Lincoln.  Sam, now retired, used to be a boat painter on the Leeds and Liverpool Canal and told me about the unique art form of that area known as Brightwork.  I had never heard of Brightwork and was fascinated that there was another traditional art form of the Waterways that appeared to be so little known and was therefore determined to find out more.

The opportunity to learn about Brightwork came when I was asked to produce pieces for the show garden sponsored by Welcome to Yorkshire at this years Chelsea Flower Show, being a canal complete with lock gates and a lock keepers hut. The brief included that the artwork feature the well known Bingley 5 Rise Locks on the Leeds and Liverpool Canal.

I did explain that I am not a fine art artist but that I would look to paint Bingley Locks in the traditional Canal Art style. My husband suggested a coat hanger board which could be hung on the wall of the lock keepers hut and this got me thinking back to my conversation with Sam Yates, 3 years before, and his mention of Brightwork.

I tracked down a copy of Sam’s book “Brightwork”, which he had co written with Mike Clarke, and which talks all about the history of this beautiful and unusual art form of the Leeds and Liverpool Canal, complete with old photographs depicting boats painted in this style.

I decided to paint Bingley Locks in the picture panel and paint the bottom boarder in multi coloured dog tooth with scrolls down each side, including the white rose of Yorkshire in the design.

I love the understated colours of Brightwork. They are so very different to the much bolder colour pallet of the Roses and Castles art form and provides a wonderful contrast to my Canal Art portfolio.

I hope that by painting a piece in the Brightwork style this will help highlight this seemingly little known traditional art of the canals and bring it back to the fore. 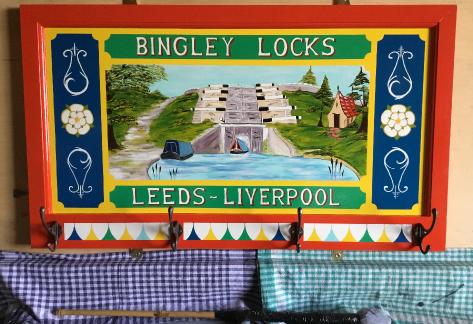 Brightwork is a traditional artwork unique to the Leeds and Liverpool Canal.

It uses a different colour pallet to that used in the more familiar Roses and Castles art form.  Brightwork colours are typically that of yellow, light green and orange/red compared with the much bolder colours of bright red, blue and dark green of the Roses and Castles which can be found widely on the canals of the Midlands.

Space is filled not by roses but by scroll work.  Boarders and edging are described by multicoloured dog tooth designs, small diamonds and feathered crosses.

Brightwork styles varied between the different boatyards resulting in subtle differences between those painted at the Leeds end and the Liverpool end.

As some of the larger vessels were sea going, Brightwork was often confined to areas less likely to be damaged by the riggers of ocean travel.

The Auction was held at the Double Tree Hilton on Brayford Wharf in Lincoln. Lots of people turned up to watch and bid, the room was heaving. There was a lot of interest in my Baron and he finally sold for £6,800. I'm told that the buyer is going to put him in the garden. That seems rather fitting since he is painted with roses, daisies, marigolds and forget-me-knots. In total the auction raised £167,000 in aid of the Trussell Trust Food Bank Charity. It was great fun to be part of this historic event in celebration of 800 years of Magna Carta and to help support such a worthy cause.

Here's to the next project!

I wanted my design to look as if the Baron was wearing clothes which is why I kept his arms and helmet simple whilst painting a riot of colour on the rest of him.

The timescale for painting the Baron was only four weeks so I immediately arranged to collect him from the transport depot. Fortunately he just fitted into my car. He was made of fibreglass and very heavy!

It was only when I got him home that I realised how big he was. The designs I had submitted were only for the front and back but I discovered that there was lots of space round his sides so I had to think how I would fill those spaces. After a few sketches I decided to paint a Heron on one side and a Swan on the other since they are two birds that are commonly found on the Lincolnshire waterways.

My sponsors were BITC- the Healthy High Street programme and included M & S, Lincolnshire Co-Op, Boots, Santander and Lincoln BIG. I had a meeting with them to discuss how the design would work on the actual baron and then that was it! Time to start painting.

I wanted to include 2 different styles of rose design that are found in traditional canal art so painted Braunston style roses on the Baron's garland round his neck and round the castle scene picture on the back. I then painted knobstick rose garlands on the 2 bottom front panels and on the back of his helmet.

Those who are familiar with the castle scenes of canal art will know that there are several elements in the picture which are always present; mountains or hills, a river/lake or both with a bridge, boats and the castle. Depicting Lincoln in a traditional canal art castle scene was perfect since all the elements in the city are there; the castle and cathedral on top of a hill overlooking water with a bridge across it. I simply made the scene into a canal art style.

The back panel of the Baron shows Lincoln Castle and Cathedral sitting on top of the hill and overlooking Brayford pool where a narrowboat is sailing past. The sponsors also wanted me to include something to remember Lincoln's industrial heritage and, since steam trains were an important part of Lincoln's history and the coming of the railways also heralded the start of the decline of the waterways network, I decided to include a steam train in the picture. 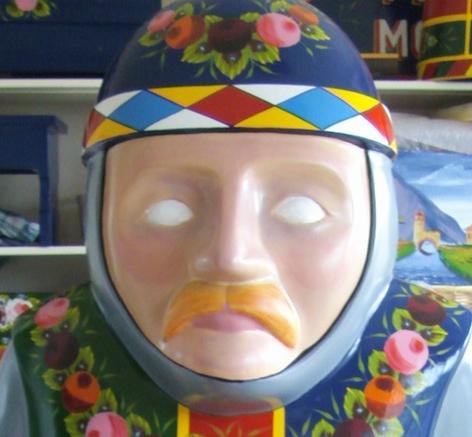 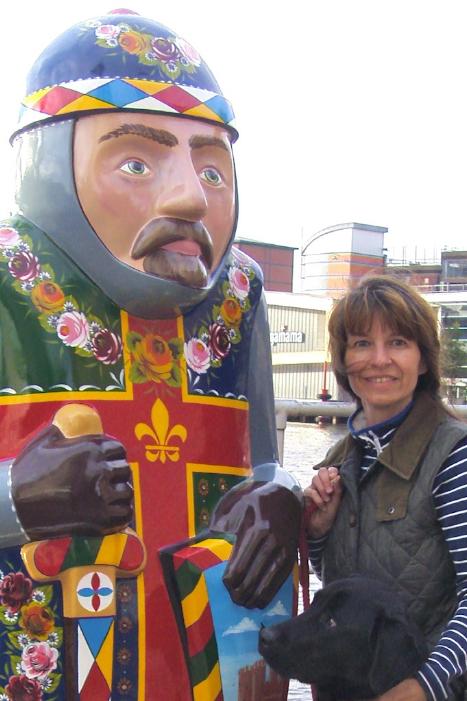 The Baron's Shield (below) was large enough for me to paint another castle scene. Wanting to keep to the Lincolnshire theme I decided to paint Tattershal Castle, near Coningsby, home of the Battle of Britain Memorial flight, hence the silhouette of the Lancaster Bomber flying overhead. Again, you can see all the traditional elements of castle scene as used in canal art in the picture.

You can see from the picture at the bottom of the shield there is a 'U'. The organisers of the Baron's Trail allocated a letter to each Baron for people who are walking the trail to collect and form a slogan which lead to a prize of chocolate coins!

Another style of traditional canal art is the use of diamonds and diagonal stripes and there were several places on the Baron where this technique could be used.

The most challenging part for me was his face. I'd never painted a portrait or any type of face before but I knew I wanted him to look as realistic as possible. I started off by reading some techniques on painting faces by those who paint napoleonic die cast models used in recreating battle scenes of the 18th and 19th centuries. After mixing lots of different colours, and after several attempts at painting his face, I eventually managed to get just the right skin shade I wanted to achieve. I wanted him to have fairly rosy cheeks so rubbed a bit of rouge colour on his face with a piece of kitchen roll. 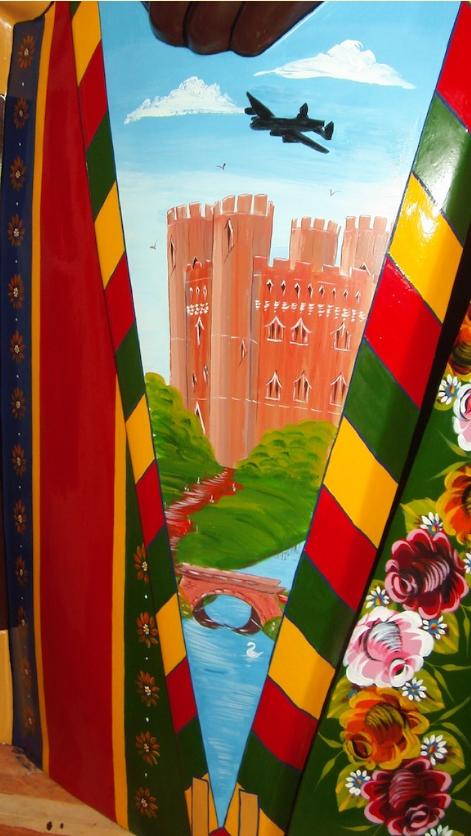 I believe the eyes (above) either make the face look real or not so I spent some time trawling the internet and looking at how portrait artists paint eyes and used this technique on my Baron. I'm very pleased with the result.

Transporting the Baron to his Plinth

The start of the Magna Carta celebrations on the 13th June included the unveiling of the final baron - mine!. My Lincolnshire Waterways Baron took a spin round Brayford Pool on a boat before being lifted onto his plinth on the quayside opposite the Lincolnshire Echo building.

It was a very rainy day but lots of people turned out to watch it and it was great fun being part of the festivities. 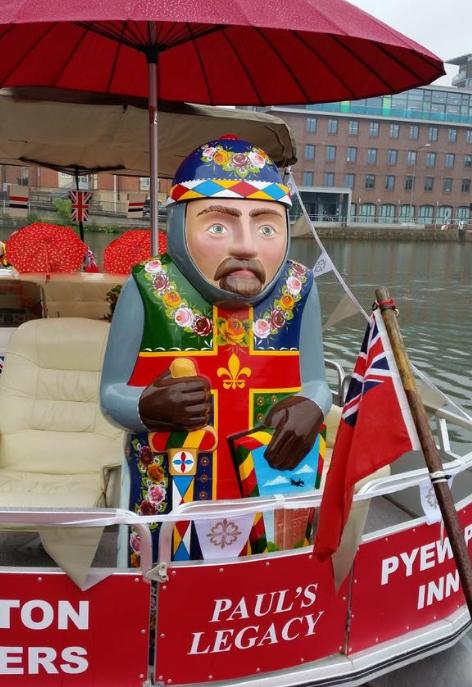 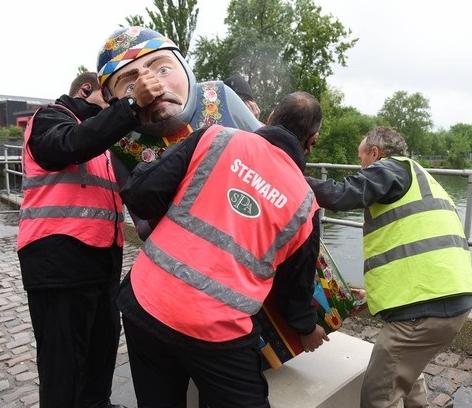 Waterways Baron with Melanie Clare just before the auction.

Completed Baron being transported by boat around Brayford Pool.

Completed Baron being lifted onto his quayside plinth opposite the Lincolnshire Echo building. 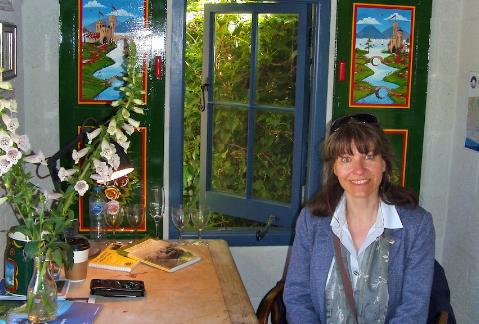 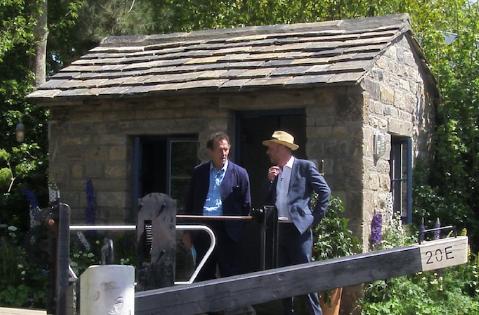 Monty Don and Joe Swift outside the lodge.

The Bingley Locks board inside the lodge

Cabin doors frame the window & billie-can on the desk.

Below and left: Congratulations to Mark Gregory and the Welcome to Yorkshire Garden team on a Gold Medal yesterday at the Chelsea Flower show.

I had the privilege of being there to see how Mark has incorporated some of my canal art pieces into the garden design. The Brightwork Bingley Locks board hangs in the lock-keeper's lodge facing the open door and is home to the keeper's windlass, life jacket, straw hat etc. The cabin doors hang either side of the window like shutters and other pieces are set at random around the lodge.

I have really enjoyed being involved in this amazing project and even gave an interview to the BBC while I was there! 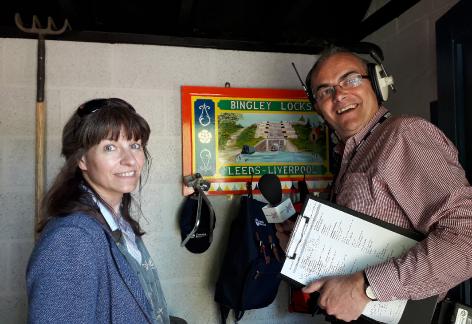 With BBC's Melvyn Prior inside lock-keeper's lodge.

The artwork I did for the Chelsea Flower Show Welcome to Yorkshire show garden is going on exhibition this week for the whole of the summer at the Standedge Tunnel Visitor's Centre, so I have just painted this pair of planters (right) in the same style as the milk churn I did for the garden just to serve as "bookends" for the display. There is more about this on my news page.

I am delighted that the collection of work I prepared for the Welcome to Yorkshire garden at the Chelsea Flower Show has now gone on exhibition at the Standedge Tunnel Visitor Centre Museum where it will be on show until the end of October. My grateful thanks to Alice at WTY and Sarah at Standedge for helping to make this happen. Full details are on my NEWS page.

Click arrow on pic on the right to connect to a short movie. 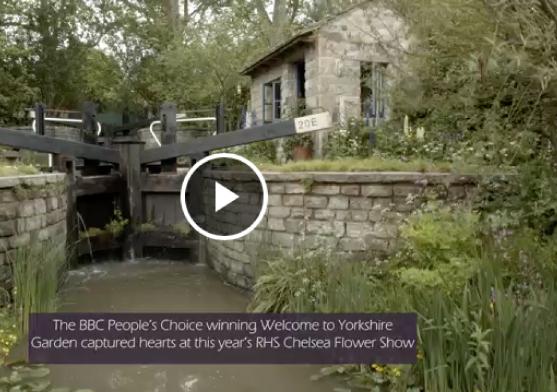 He's arrived in my studio! I am thrilled to be working with the New Theatre Royal on an Imp (left) for this year's Lincoln sculpture trail. Now I am just impatient to get painting!